As a Japanese TV drama addict, I am recently following one program called Kekkon Shinai (Wonderful Single Life). It is about single people in 30’s and 40’s, and their reasons of not getting married. In fact, compared to 10 years ago, the percentage of unmarried women in Japan have increased by 6.7% and 8.5% for woman in their early 30’s and late 30’s respectively. With increase in number of people who are delaying marriage or never get married, single person households are also on the rise. In 2011, it accounts for 31.5% of all households in Japan. 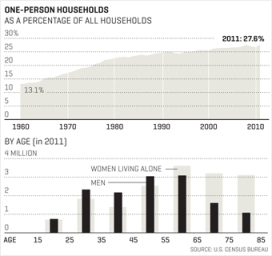 The same case applies globally. For example, there are 28% of single-person households in US in 2011 (compared with 13% in 1960), and the percentage is even higher in metropolitan cities like in Manhattan, London and Paris.

In the book “Going Solo:  The Extraordinary Rise and Surprising Appeal of Living Alone”, New York University Professor Eric Klinenberg suggested that people live alone by choice, and the motive is supported by their higher discretionary income. In US, according to the federal Consumer Expenditure survey, their average per capita annual expenditure was $34,471 in 2010, compared with $23,179-$28,017 for married individuals. But is single life wonderful? Singles’ day is now celebrated in China. And living alone doesn’t mean to be isolated from social life. Klinenberg pointed out that in fact they have more chance to socialize. They are more likely to go out with friends and attend interest class.

What does it mean? While some of them may choose to stay alone for rest of life and some of them will get married one day, they drive up the demand for single person housing. Without financial burden, they may also indulge in higher quality of life. Debeers is now marketing “right-hand ring” to single woman, to change the mindset of diamond is for engagement. Smart brand should take account of this important tribe and offer single-minded products to them.